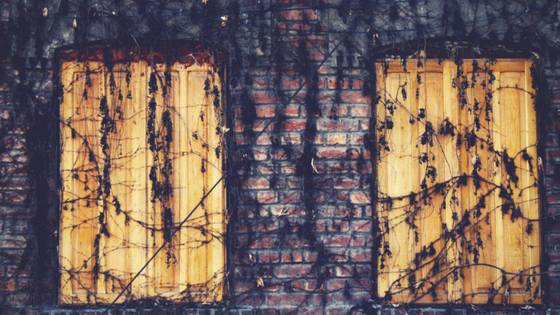 I just got back from giving a workshop and author talk at a school in upstate New York that I absolutely love. It was a return visit; they had brought me out for a different workshop last October, and then surprised me with an invitation to do a follow-up at the end of their spring semester. I’ll probably post later about some ideas and insights that came out of it, but here’s something else that delighted me: the opportunity to spend three nights in a guest room enigmatically tucked in to a vast old academic building, between the Office of International Studies and Admissions.

It’s always a fun surprise when a host institution puts me up in something other than a standard-issue off-campus hotel. Over the years, I’ve stayed at, for example, a stunningly renovated Fairfield Inn (really!) that was part of a big public-private collaboration project, and an enormous, perfectly appointed and preserved Craftsman mansion. Especially for the older buildings like the one I just stayed in, the back story is a big part of the charm. I’m not sure I completely understood the whole story of how there came to be a little clutch of hotel rooms inside that stately office building, but I loved that there was one, and that my hosts shared it with me.

It reminded me of a mysterious feature of the building where I work now. It’s a 100-year-old former dormitory converted to offices and classrooms, with beautiful views and loads of vintage charm. It has its idiosyncrasies, like noisy 1950s linoleum floors and an industrial-grade steam heating system that defies all attempts at modulation, but overall it’s just a normal academic building – with one funny exception.

I stumbled upon it when leaving late one night. There’s a door I pass every day on the way out; it looks like any other, and I never once considered whose office it might belong to, even though it’s the room directly below my own. We’ll call it Room 47. This particular night, the door happened to be open, and I looked in to see not an office, but a fully appointed family apartment, with a cozy kitchen, living room and everything else you’d expect in a campus residence. It was surreal, and I had to stop and wonder for a minute if I wasn’t experiencing an episode of lucid dreaming – maybe that one where you randomly discover a whole region of space you never realized was there.

Who lives in Room 47, and how did this arrangement come to be? I don’t know either one of these things, and I don’t think I am going to ask. The mystery is a wonderful thing, and I’d hate for the question to come off as a complaint or criticism. I assume, though, that it’s a holdover from some earlier arrangement, a legacy of an agreement made long ago and still honored.

And this, in a way, mirrors how our universities are built and grow over time: organically, not always strategically, and sometimes weirdly. Applied to spaces in old buildings, the results of organic growth are often just fine, charming even.

Applied to the organizational structures that let us accomplish our work, the results are much less so. We’ve all seen the programs, classes, or perhaps whole offices that no longer serve much of a purpose, but stay in place because they were promised as part of deals struck long ago, ones tied to priorities and personalities that were important at the time.

At its worst, it’s as if we’ve borrowed the design philosophy of the Winchester Mystery House, tacking on rooms or whole wings, creating features that are beautiful on their own but don’t hang together. This constant busy-ness in the name of growth lends a superficial appearance of an institution that is vibrant and forward thinking, but to what end? How do we make sure that each new thing we add is contributing something new, not replicating what we already have?

Programs ought to be structured around the goals they’re set up to accomplish; this seems terrifically obvious, but sometimes they much more strongly reflect the ideas, priorities, and quirks of the people who created them. Given how universities work, I don’t know if there is a fix for this. The mere existence of institution-level strategic plans doesn’t do the trick; what institution today doesn’t have these, plus committees and sometimes entire positions devoted to getting them done? For administrators, it also takes enormous discretion to know when to leave a program alone and when to restructure it or just wind it down, and the latter option in particular burns so much time, political capital and goodwill that it’s a wonder it ever happens.

What’s your room 47? Is is a charming mystery, or a pointless vestige?