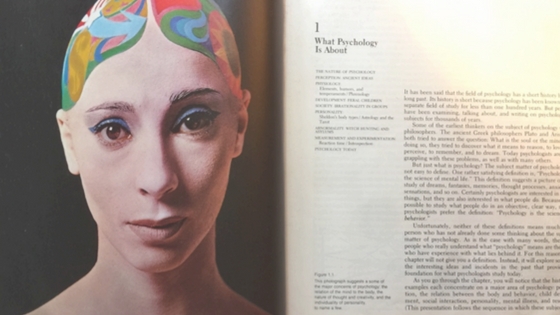 Can a textbook change your life?

Posted in Cognitive Psychology and Learning, Higher Education, Technology, and Trends and Change 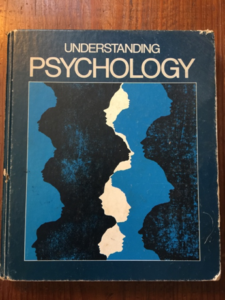 When we think of books that change our lives, we’re usually talking about a beloved novel. Or maybe, if you are very practically minded, a self-help book, or a biography of someone you admire.  Rarely do we mean a textbook.

Do we even really think of textbooks as books, the way we do other works that move us, inform us, and yes, change us? Even at this time of year, when we teachers are diving back into the texts we’re assigning in a few short weeks, I think we rarely do.

Textbooks are not art, and many of them aren’t particularly well crafted either. But one really did change my life, deeply and as dramatically as any novel, memoir, or biography ever could. It was an inch-thick volume called Understanding Psychology, which I discovered when I was around fourteen.

Published in 1974, this book was left over from one of my mom’s required courses for the master’s degree she was earning. I probably picked it up during one of the long hours I spent puttering around the house as a bored latchkey kid in the pre-Internet era, and from the first page, I was hooked.

I read the thing like a novel, beginning to end, then I went back and re-read the chapters I liked the most, flipping back to the illustrations, side notes and other features I missed the first time around. Part of what I found so engrossing was something I still love about our field: the way we break things down into different, distinct perspectives, which don’t compete with each other but instead form unique ways of answering questions about why people think and act the way they do.

There were theories about people’s interactions with each other (social psychology), thinking and remembering (cognitive psychology), growing up (developmental psychology), why people are different from each other (personality psychology), and all the other subfields familiar to anyone who’s ever made it through Psych 101. It all struck me as a comprehensive, balanced, and pretty perfect way of getting your arms around a subject as vast and complicated as the human mind.

I now realize as well just how far ahead of its time this textbook was. The writing was clear and direct, the style conversational rather than encyclopedic. It used tons of illustrations, not just the dry diagrams of previous generations of books but a vivid and diverse assortment of paintings, photos, historical illustrations, and pop culture items. There were even comic-book-style cartoon strips, including a whole set with a recurring character named Emmett Cerf, an unfortunate medieval peasant who experiences operant learning through reinforcement, extinction, and punishment (mostly punishment).

It also had remarkably progressive views on what were then, and continue to be for some people, hot-button social issues. Its chapter on motivation (where sexuality lives in your typical intro book) put forth the then-revolutionary idea that sexual orientation normally varies along a spectrum. Gay and lesbian people, it said, were diverse individuals not solely defined by their orientation, and whose problems – save those caused by social prejudice – were not that different than those of heterosexual people.

Similarly, it talked about gender roles as social constructs that are unfairly confining to men as well as women. It had a no-drama, matter-of-fact take on sex, which it presented as a natural and normal part of life as well as a fit subject for scientific inquiry.  And lastly, echoing the civil rights movement of the time, it discussed the devastating effects of prejudice and discrimination, both on individuals and on human societies.

This would have been pretty eye-opening for any teenager coming of age in the 1980s, but in my case there was more to it than that. This book laid out for me what I’ve come to know as the core values that psychologists share, across all those disciplines and perspectives, and to this day, I remain fiercely proud of this side of my academic discipline. We psychologists have had our less-than-stellar moments through the years, but when it comes to big-picture issues of inclusion, fairness, and respect for scientific inquiry, I think we’ve been on the right side of history more often than not.

When my mom downsized her house, Understanding Psychology was one of the few things I specifically asked her to save for me. It did, after all, alter the course of my life.

But now, doing the work I do, I also see this treasured artifact through the lens of the education technology movement, which increasingly looks on textbooks as a relic from another age. When textbooks are discussed at all, it’s rarely in fond terms. Rather, it’s:  Ridiculously exorbitant retail prices. Superfluous, greed-driven new editions. Whether these books are even needed at all, in an age defined by the ability to locate, remix, recombine and re-distribute information at will.

According to the ed-tech wisdom of our time, the textbook industry is ripe for disruption. One thing that could displace it is the rise of “digital courseware,” the catchall term for systems that, depending on how they are set up and used, can plausibly stand alone as textbook replacements. There is no shortage of companies providing different variations on this idea: CogBooks, SmartSparrow, Top Hat, and WebAssign are just a few providing the combination of content and interactive features that could give the traditional textbook a run for its money.

Or, we could skip the replacement products altogether and go to free, open educational resources, such as Noba Project modules or the materials promoted by Lumen Learning. In an era where textbook sticker prices now regularly blow past $200, this is appealing indeed. Open educational resources (OER) have become something of a social justice cause, with advocates pointing out that access to higher education means little without access to affordable materials. That plus widespread exasperation with traditional publishing companies continues to fuel interest in OER, and we will probably see more low- and no-cost textbook alternatives coming into the mainstream as a result.

All that said, we are not even close to having a fully realized set of options for replacing textbooks across the college curriculum. For one thing, the coverage across disciplines is uneven, with lower-division STEM courses and big-ticket social science classes like introductory psychology heavily overrepresented compared to other subjects. The smattering of offerings that’s available in different systems means that you, the instructor, can’t simply pick a technology platform you like and then shop for class materials within it.

Even if you do find the right course materials, they may not be set up in a way that you can live with. The content itself may not be up to your standards, perhaps reflecting the fact that online resources are unlikely to go through anything resembling the editorial process for a traditional textbook.( I talk more about about that problem in this article.)

Or even if individual pieces are great quality, the lack of a unifying vison might lead to a  disjointed overall impression. Noba modules, for all their stellar scholarship, suffer a bit from this problem, as they tend to go into depth on specialized topics that don’t necessarily hang together as a whole. And lastly, when you’re working with commercial products, you might not even be able to learn about the proprietary algorithms that underlie features such as adaptive quizzing, a troubling problem discussed by online learning pioneer Candace Thille in this article.

And for all the talk about so-called digital natives and their preference for all things digital , other research suggests that many college students prefer paper to screens for their study materials. So, if it’s student satisfaction we are after, chasing ever-more-high-tech products may be the wrong way to go.

All this causes me to feel about digital textbook replacements the same way I do about the self-cleaning houses and flying cars that were supposed to be a part of twenty-first century life. I feel like I was promised one way back when, but it’s nowhere on the horizon, not really.

I will be the first to agree that the textbook system needs reform, and we absolutely need to be looking at quality alternatives that students can actually afford. Ideally, these will feature the best of what technology can do (interactivity, personalization, rapid updating of content) while sidestepping the worst (crashes, overly complicated and non-intuitive interfaces, unattractive graphics, lack of portability across platforms and devices). Make no mistake: this will be expensive and slow, especially if we really are going to match the quality of the academic content found in commercial texts.

Even if we do realize that futuristic vision of full digital replacements, what will be lost? I’m not talking here about the feel of paper under your fingertips; as a die-hard Kindle fan, that kind of superficial stuff isn’t a point of nostalgia for me. Rather, it’s the ability of a book, even a textbook, to unspool the story of a discipline in a way that is deep, engaging, and carries the author’s voice and vision from the beginning to the end.

Narrative and storytelling are beginning to be empty buzzwords in education, but even so, there’s a lot to be said about this aspect of traditional textbooks. When authors have the space and time to tell that story, and the ability to do it with style, that’s when you have something that can change a student’s life forever.

Is the digital courseware movement pointing us in that direction, towards materials that aren’t just affordable and convenient, but transformative? Will academics thirty years from now look back on their online learning experiences the way we look back on our favorite textbooks?  I don’t know, but I hope we set our sights on it, and that we settle for nothing less.