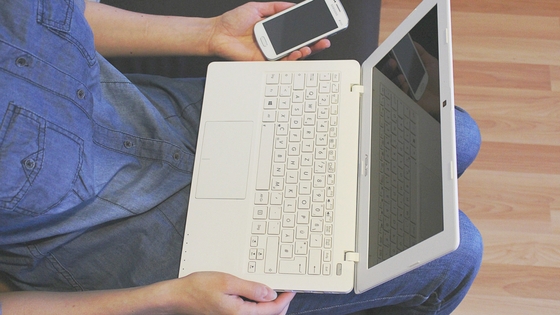 Addiction, accommodation, and better solutions to the laptop problem

Posted in Higher Education, and Technology

It started with the wonderful realization that I could bring a book with me everywhere.

I treasured the reader app on my newly-acquired smartphone; it was at the ready as I trailed around after my then-small children, letting me read here and there during all the little pieces of downtime that happen at the pharmacy, music lessons, while sitting next to an almost-sleeping kid at the end of the day.

I’d never again have to lug around a heavy paper book, and if I finished one I could go straight to the next. I loved the self-lighting feature too. That led to more reading at night and then, finally kicking television – which was, after all, the signature time suck of my generation.

I’m unusual in that I like, indeed prefer, to read on a screen, loving everything from the fast scrolling capability to the built-in dictionary to the fact that I never need to ransack my purse for a highlighter when I hit on that perfect paragraph.

I’m also a big fan of digital note-taking. I started out with a tablet, first experimenting with a stylus but eventually settling on typing as my favorite modality. The iPad’s virtual keyboard took some getting used to, but with practice and wide latitude for tolerating typos, I began using it almost exclusively to record notes from the increasing number of meetings and presentations I was going to as a budding program administrator.

For my purposes, this was huge. It gave me a searchable, cloud-stored database that I could pull up anytime, anywhere. With projects that stretched over months and sometimes years, this made it possible to quickly pick up where I left off with each one. And yes, typing the notes was fast and blissfully easy.

When I say it was easier, I don’t mean it took less thought. It was easier like walking with snowshoes is easier than post-holing through thigh-deep drifts – going from something that’s tedious, exhausting, and unsteady to something that is, if not lightning-fast, at least more comfortable. This is because I have always found handwriting to be a miserable slog, something that is physically taxing and psychologically frustrating.

How long has this been the case? Since I first held a pencil, pretty much.

These days I’d have been diagnosed as a kid with dysgraphia. Dysgraphia can involve just the physical act of putting letters to paper, or spelling, or both. In my case, spelling wasn’t the issue – I’ve always excelled at that, but you couldn’t tell it from what I could write by hand.

What causes this? Like most things in psychology, it’s probably a combination of the biological and environmental. On the physical side, there may be a glitch in visual motor integration, the brain’s ability to take what you see and turn it into something you can draw.

In my case, the environmental part is quite clear. When I got to first grade, I joined the class a little late, which led me to miss the crucial step of learning to hold a pencil the correct way, with the thumb and index finger bracing it against the hand. Instead, I settled on a combination of the middle and index fingers in a claw-like arrangement.

By the time this problem was discovered, it was deeply engrained and essentially impossible to correct. Even now, as an adult, I’ve never been able to break this habit. I can, with deliberation, write slowly and legibly in a more-or-less proper way, but when I’m focused on something else and need to write with speed – back to the old grip I go.

There was another major setback to my writing development, which was the serious fracture to my right wrist that happened when I was about 8.

This wasn’t a minor thing that would knit up in a couple weeks – rather, it was a multi-month ordeal in which the bone was set, then re-set, then – after I failed to stick the landing on a dramatic dismount from a playground tire swing – broken again.

Besides sidelining me for a significant period during which I would have been practicing, the injury meant I would not regain full fine motor function in that hand for a long time, or perhaps ever.

Typing, was, blessedly, another story. I had top-notch instruction in high school which – while not exactly fun or enjoyable – set me up with the correct techniques from the get-go. I became a fast if not particularly accurate typist, something I later parlayed into a good part-time job as a typesetter with my college newspaper.

And so, when mobile devices came on the scene, I jumped on that as my main means of recording all the data of my professional life – which, besides searchability and portability, meant I would rarely have to experience that physically uncomfortable, frustrating experience of writing by hand.

I can only assume that some of our students have similar stories.

For those that do, I wonder how they would feel about media pieces like this one from the New York Times, with its frankly finger-wagging tone about how digital note taking is less educational, lower quality, and inevitably distracting.

As Jesse Stommel points out, laptop bans are one of the most divisive topics in higher education right now. I think this is because they tap into intersecting anxieties about the role of lecture, perceived loss of control over students and their attention, technology, and change. It’s a dynamic that’s articulated especially well in this piece by Robert Talbert – written, by the way, in response to a completely similar wave of reaction to a completely similar piece published in The New Yorker in 2014.

It’s not all just about control and change though. It is absolutely true that having that device out – be it a laptop for notes, or a phone, to weigh in on the in-class polls or other neat tech-driven activity – sets you up for massive distraction.

It takes an iron will not to wander off into everything from email to Amazon to undersea videos (spider crabs!) when you are using your note-taking device. And if those things don’t spirit you away to distraction land, the prompts from others – alerts, pings and did-you-get-my-text? nudges – easily will.

If you don’t believe me, go to the back of the room at any faculty meeting or conference presentation, and see how many of us have failed to resist the pull. And of course, if we can’t do it, our students probably can’t either.

You don’t have to be an anti-technology curmudgeon to see that it raises questions about addiction, self-management, willpower, and even the ability to handle boredom.

My own technology history is a case in point. Over time, that virtuous habit of digital book reading fell apart, giving way to a pattern of browsing random news pieces or social media feeds during small bits of downtime. Being the self-aware psychologist that I am, I have a better ability than most to notice, correct and compensate for this, but even so, I have to work at it.

Over the years, I’ve asked many of my students about their relationship with technology, and from that, I know that they struggle with the same stuff. Furthermore, far from conforming to the stereotype of uncritical millennial technoholics, many of them are deeply ambivalent about the role of technology in their lives.

So what can be done about all this? I agree that outright bans are problematic, given that you will always have to make exceptions for students with accommodations, and when you do, it reveals their disability status to everyone.

You can split the difference, as we used to do in our 400-student Introduction to Psychology course. It was like an old-school “smoking or non-smoking?” arrangement, in which the first 10 or so rows were designated as laptop-friendly, and the rest were laptop-free. We stipulated that watching videos, shopping or doing other distracting stuff wasn’t allowed, a ban that was mostly symbolic but was at least theoretically possible to police in that limited zone.

But my favorite strategy by far has nothing to do with policies, or penalties, or co-opting the technology for in-class learning. Rather, it is leveling with students about the need to own your technology rather than letting it own you, and helping them learn how to do that for themselves.

Faced with the false choice of ban or go all in for technology, we need to partner with students to manage this aspect of contemporary life. This needs to be a natural and normal aspect of being a functional adult in a tech-saturated society, an essential modern life skill if there ever was one.

These conversations should acknowledge the limitations of human attention, and offer some foundational information about how memory and attention work together when we’re doing things like trying to learn new information.

Our students are likely to have some significant misconceptions about these aspects of the mind, not because they are students, but because they are human. Our psychology is rife with misunderstandings of everything from the quality of our intuitions to fundamental facts about how memory works, making us all pretty poor judges of our cognitive capabilities.

We also need to be talking about concrete solutions. How do you manage alerts, for example? Should you resolve to put your phone in airplane mode in class, and if so, how do you stick to that resolution? Should you block problematic sites from your laptop, or start using a time tracking app for your phone?

And if we really are concerned about the notes students take in class, instead of just complaining, we should be teaching them what we want them to do. Deliberate, effective note taking, the kind that helps synthesize and solidify what they are learning, is not something all our students picked up in high school, and so there is a strong case to be made for explicitly teaching this skill in college courses.

As in so many things, the answer to the laptop problem is not a simple one. The problem is real, but bans are a quick and problematic fix, addressing that one class perhaps but failing to equip students with more lasting skills in handling this aspect of modern life. Tech can be wonderful, and tech can be terrible – so let’s keep the conversation moving with honesty and a respect for why we come to use it in the ways that we do.