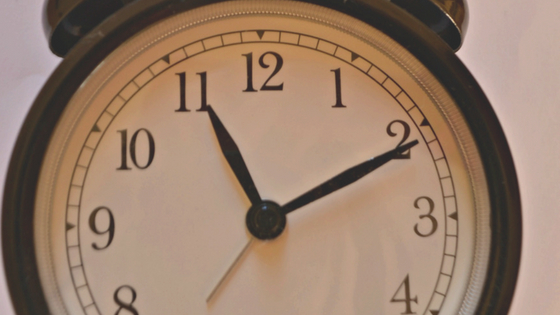 Where does the time go on sabbatical? I know, because I counted.

You know that part of making Thanksgiving dinner, when you’ve taken out every ingredient, dirtied every utensil you own, pots are bubbling but you haven’t produced an actual edible dish yet? That was me, about three quarters of the way through my one-semester sabbatical.

That sabbatical ended for me this week, and so, ready or not, it’s time to step out of the kitchen and back into my regular work life.

Because I’m wired to like novelty, the change of pace – even from a relatively-slow one to the frenzy of semester’s beginning – has me feeling energized. But because I’m also someone who prizes the autonomy of faculty work, I’m feeling some loss as well as I step back into the rounds of class meetings, standing meetings, regular meetings, emails (so many emails) and much, much tighter deadlines for everything I have to get done.

Situations like the end of a sabbatical leave often make us ask “where did the time go?” Anticipating that this is exactly what I would be asking myself come August 27, back on January 1 I developed a solution that was admittedly literal-minded (another trait of mine) but that would let me at least answer the question.

I set up a document where I tracked my time each day, recording a rough count of hours spent on different areas (writing, research tasks, email and logistics, university business) and jotting a few words about what I mainly did that day. At the top, I had the spreadsheet prominently display a running total of all hours spent directly on work, along with a target number I set and the percent complete.

My time log had something else that functioned to grab my attention: a countdown showing how many days I had left, as well as that number expressed as a percent that the sabbatical was over. This memento mori –lite definitely pushed me to realize the finite nature of the time I’d been granted, and to grasp the fact of it passing.

The idea of time tracking as a productivity practice tends to be very polarizing, with people either swearing by it or being utterly repulsed. It’s a big part of some pretty powerful time management frameworks; for academics, Robert Boice’s seminal work on productivity is a familiar one, being at least partially based on an understanding of where our academic work time actually goes (hint: not always where we think it did, or where we were supposed to be spending it).

Outside academia, Laura Vanderkam’s books about work-life balance pitch time tracking as a necessary first step to building a full but enjoyable life, one with lots to do but without overwhelming stress. The idea is that gathering data about what’s actually going on in your life and work is the necessary first step to making meaningful changes.

I’ve thought and read a lot about frameworks like this, and so I know that there are on-target, thoughtful criticisms as well as some problematic blind spots associated with them. But as any expert on intentional behavior change will tell you, having the data is an important starting point. And to those who see tracking as a time-wasting obsession unto itself, I would say that it’s not really about chasing down and documenting every minute. Rather, it’s a tool for checking in with ourselves, as honestly as possible, about whether our actions are aligned with our stated goals.

This logging process may not be for everyone, but it’s helped me a lot, especially during periods when my time is either at an extreme premium or is extremely unstructured. And now, I’m glad to have a day-by-day record of how I spent the last eight months.

That said, a successful sabbatical, or any successful stint of faculty work, can’t just be about clocking hours.  So along with my time log I set up my list of goals, starting with the ones I put together (what seems like a very long time ago) in my original sabbatical application. That encouraged me to keep a running tally of project components that I could remind myself about, cross off, and add to as the months went by.

What did my goal tracking tell me, at the end of the day? Nothing terribly reassuring; I was far from a goal-accomplishing machine, and the actual set of completed items maps only partially onto the list I started with. But I’m okay with that, knowing that for most of the things I didn’t get to, there were others that swapped in, like the surprise opportunity to go to China or the invitation to join a major international survey project (stay tuned for more on that in a future post).

To me, that list of crossed-off tasks looks a lot like my career these days, containing a mix of collaborations with other people, a few projects that I run myself, and one or two long-shot efforts that I keep mostly under wraps.

To anyone else, it would probably look like a mess. That’s okay too though, because I know that the assortment is bound together by common threads having to do with technology, education, and working to help faculty grow in their teaching practices and careers. Even though it’s a big, hectic family of projects, I can see the family resemblance, and I feel good about where it is all going.

I’m especially relieved to have something to show for my sabbatical given the extraordinary privilege of having it in the first place. In a more equitable academic world, this is something that we’d all get to do regularly, and I think we’d see some amazing work as a result. But we all know that such privileges are probably going away in the contemporary scene that is so sadly dominated by the speedup and deskilling of academic work.

In short: I’m acutely conscious of what I was granted, that most people don’t get it, and that I needed to do something good with it. And that doing so wouldn’t be easy, because most of us struggle at least a little bit when we’re trying to make the most of totally unstructured time.

And so, like with Thanksgiving dinner, I tried to focus first on getting that turkey on the table, and then at least a few things to go with it, until time ran out. Maybe I ended up serving store-bought rolls instead of homemade, and maybe the napkins weren’t folded perfectly, but I was able to serve up some things that people will appreciate, and enough things to call it a meal. I’m grateful, and if not exactly raring to return to the ever-more-hectic rush of early semester, feeling up to tackling it.

Special thanks to Katie Linder for her encouragement and great advice.