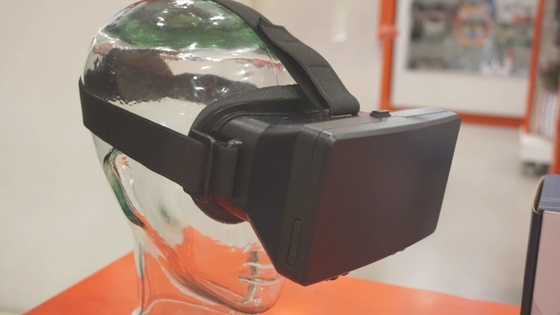 On (re)living the real and almost-real, and what it means for learning

Posted in Technology, and Trends and Change

We glided down to the sidewalk in front of the Städel museum in the middle of Frankfurt, Germany.

“That’s where she is?” Giovanni asked me. “Your daughter, in there?”

“Yes! That’s the museum, and behind it is the Städelschule – that’s the art institute where she goes to college.”

We turned right and started hopping down the sidewalk, rounding the corners and heading around behind the building complex, marveling at the neighborhood and the exquisite Städel building itself, the art institute extending behind it in a recently-built addition enclosing a sculpture garden.

I remember everything, the busy tram stop across the street, the stately trees, bikes on the sidewalk, the faded German sunlight.

Except that none of it really happened.

Well, it did, but as you might have guessed, it happened not on real-Earth but rather Google Earth, running on a couple of VR headsets.

That day, I was getting acquainted with the capabilities of of Northern Arizona University’s IVR Lab under the guidance of Giovanni Castillo, its founding director and the creative and technical force behind the laboratory. He suggested that I try some open-ended exploration with the Google Earth program, and after randomly clicking around for a bit, I chose to zoom down on the place where my oldest daughter goes to school, a place I’d briefly been once, years before, but never explored in its entirety.

VR can be a lot of things – disorienting, dizzying (literally), fun, strange, and emotional. Especially for a mom whose oldest lives 5,000 miles away, the emotional part certainly delivered on that day.

And as an ed tech person, of course I’m intrigued by the applications to learning. NAU’s IVR laboratory, like others around the world, is hard at work devising an impressive range of programs for learning, as well as others that promote storytelling, mindfulness and more. The things they have created to date are truly astonishing, and raise all kinds of questions about how virtual environments might make up a bigger part of the educational technology scene in years to come.

For that to happen, though, we have to face up to some practical questions. How will activities like this, which are so individualized, be integrated into the kinds of large, gateway courses where high-powered help is most needed? What are the best practices for setting up environments that promote learning, and do these practices differ according to the specific topics you’re trying to teach? How do we make the most of the considerable resources that go into building VR programs and environments?

And in order to know how to address those practical questions, we need to build up our understanding of what goes on in the mind when we’re experiencing VR, and what aspects of the experience contribute to – or detract from – learning. Similarly, we need to figure out how individual characteristics – psychological, cognitive, educational, demographic – help shape a person’s reaction to VR. This in turn will help us predict who will benefit the most from these powerful but resource-intensive tools.

To make the most of VR’s educational capabilities (and to make a better case that those capabilities do in fact exist), we’ll definitely need to get a better handle on its underlying psychology. We need to know what’s special about VR experiences, so that, for example, we can determine what’s added to a learning activity by VR, over and above what could be accomplished by a conventional technology-based learning activity, or by a completely low-tech, pencil and paper or face to face approach.

As a psychologist, my hunch is that there probably are some unique characteristics of VR experiences. Whether these relate to its emotional, attentional, or sensory aspects, or some combination of all three, remains to be seen. But I do think it there’s something fundamentally different and special about VR, something beyond physical reality and beyond conventional technology experiences such as videogaming, something makes VR a category of experience all its own.

This leads me to back to the experience I had earlier today, which could arguably be the signature 21stcentury techno-psychological experience. It happened when I visited Städelschule again, this time in reality-reality, not virtual reality.

I stepped onto the sidewalk bordering the grand front entrance, then, retracing my pseudo-steps from a few months earlier, rounded the block. This was the part of Städel that I was actually seeing for the first time.

It was all there, just as I remembered. The bustling tram stop. The bikes. The faded German sun filtering through the stately trees.

But this time, the scene had my gloriously real oldest daughter in it too, striding down the block to give us all a big hug and show us around the place where she’s spending her college years.

It’s hard to describe the feeling of seeing a place you’ve been first in VR, but it’s a feeling that will become a more common one in years to come. In medicine, geology, and other fields likely to embrace VR as part of their standard professional training  – you’ll “be” there before you’re there for real, and I wonder how many of their students will have that same eerie moment of recognition that I did earlier today.

When we design any kind of educational exercise, we take a leap of faith that the things students learn will transfer to the environment in which they need to use that knowledge – in other words, that the educational-reality environment we created aligns with reality-reality, enough to allow transfer to happen.

This problem of transfer is clearly one that relates to VR for education, in that VR may allow us new ways to devise learning experiences that are truly realistic, while retaining important qualities of educational simulations – repeatability, protection from failure, the opportunity for feedback, hints, and other expert guidance.

But straight realism isn’t necessarily the pinnacle of VR’s capabilities. The ChemLab VR program, for example, lets you manipulate beachball-sized atoms and chemical bonds floating in a virtual environment that’s somewhat reminiscent of Star Trek’s famous Holodeck. It’s absorbing, compelling, fascinating, even for a non-chemist like me. But “real” it definitely is not.

That hyper-realism reminds me of another VR application that I got to try earlier this year, this time at the Sunshine State higher education conference in Florida. Devised as a way to promote compassion among medical students, the “We are Alfred” simulation conveys the first-person perspective of being a 74-year-old with macular degeneration and hearing loss. At just seven minutes, the program might seem like a pretty superficial way to try to induce authentic  empathy. But having done it, I can say that it is anything but superficial. I was surprised, deeply so, at how affecting it was.

Here again, it wasn’t realism, but rather, hyper-realism that made the impact, putting you into the impossible experience of sensing through another person’s eyes and ears, if only for a few minutes. And that fits well with the intent of We are Alfred, which isn’t, after all, to to teach facts about age-related health issues, but rather, to create understanding of a different, more intimately personal kind.

Comprehension versus compassion, facts versus understanding, realism versus hyper-realism: These are the ideas we’ll get to play with as we dive into this new set of applications. It will be quite a dive, too, as this is a relatively wide open area for research. Little is definitively known about educational VR; not nothing, of course (see here, here, and here for some interesting examples of research to date), but compared to so many heavily-plowed academic fields in psychology and education, it feels like pristine territory.

Granted, the field is generating a fair amount of the hype we’ve historically seen around new innovations educational technology, heavy on wave-of-the-future pronouncements and light on specifics.  And as much as I think VR is an important field to study, and as much as I genuinely enjoy using it myself, we do have to keep in mind those practical issues – such how we are going to physically manage integrating immersive VR into typical college courses, and what it will buy us when we do.

That’s a lot to consider. But while I’m not one to perpetuate hype if I can help it, I have to say, immersive VR is an awfully interesting development in edtech, one that really does seem to represent a brand-new direction in a field that has lately been stagnating. I especially love the feeling of being present at (or at least close to) the start of something that could be very, very important for teaching and learning.